Cladribine is an anti-Cancer drug that is used to treat hairy Cell Leukaemia.

This is available as a generic drug that is injected either via the subcutaneous route under the skin or as an intravenous infusion. 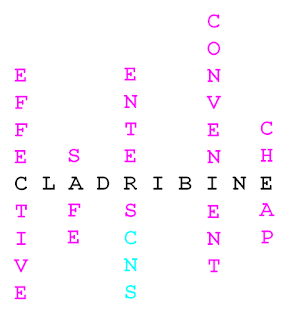 In 2010 an oral Produg of Cladribine called Movectro was Shown to be Effective in the Control of Multiple Sclerosis.

BACKGROUND:Cladribine provides immunomodulation through selective targeting of lymphocyte subtypes. We report the results of a 96-week phase 3 trial of a short-course oral tablet therapy in patients with relapsing-remitting multiple sclerosis.
METHODS:We randomly assigned 1326 patients in an approximate 1:1:1 ratio to receive one of two cumulative doses of cladribine tablets (either 3.5 mg or 5.25 mg per kilogram of body weight) or matching placebo, given in two or four short courses for the first 48 weeks, then in two short courses starting at week 48 and week 52 (for a total of 8 to 20 days per year). The primary end point was the rate of relapse at 96 weeks.
RESULTS:Among patients who received cladribine tablets (either 3.5 mg or 5.25 mg per kilogram), there was a significantly lower annualized rate of relapse than in the placebo group (0.14 and 0.15, respectively, vs. 0.33; P<0.001 for both comparisons), a higher relapse-free rate (79.7% and 78.9%, respectively, vs. 60.9%; P<0.001 for both comparisons), a lower risk of 3-month sustained progression of disability (hazard ratio for the 3.5-mg group, 0.67; 95% confidence interval [CI], 0.48 to 0.93; P=0.02; and hazard ratio for the 5.25-mg group, 0.69; 95% CI, 0.49 to 0.96; P=0.03), and significant reductions in the brain lesion count on magnetic resonance imaging (MRI) (P<0.001 for all comparisons). Adverse events that were more frequent in the cladribine groups included lymphocytopenia (21.6% in the 3.5-mg group and 31.5% in the 5.25-mg group, vs. 1.8%) and herpes zoster (8 patients and 12 patieTreatment with cladribine tablets significantly reduced relapse rates, the risk of disability progression, and MRI measures of disease activity at 96 weeks. The benefits need to be weighed against the risks. (ClinicalTrials.gov number, NCT00213135.)

What happened next. Read this Blog.

Posted by MouseDoctor at 07:30

Email ThisBlogThis!Share to TwitterShare to FacebookShare to Pinterest
Labels: Blog