The early days of Cladribine: pharmacokinetics in people with lympho-proliferative disorders

The antitumoral effect of 2-chloro-2'-deoxyadenosine (CdA) in the treatment of lymphoproliferative diseases in general and of hairy cell leukemia in particular has recently been demonstrated. Detailed information on the pharmacokinetics of CdA, however, is lacking. The pharmacokinetics of CdA after 2- and 24-h infusions of 0.14 mg/kg was described in 12 patients with lymphoproliferative diseases using a newly developed high-performance liquid chromatography method. The plasma concentration data from individual patients were fitted to a two-compartment model with α- and β-half-lives of 35 ± 12 (mean ± SD) min and 6.7 ± 2.5h, respectively. The volume of distribution was 9.2 ± 5.4 liters/kg. The steady-state concentration of CdA during the 24-h infusion was 22.5 ± 11.1 nM. The areas under the time versus concentration curves were 552 ±258 and 588 ± 185 nM x h, respectively, for the 24- and 2-h infusions. The inter-individual variability of the determinants of the plasma pharmacokinetics of CdA was small (the coefficients of variation were between 0.22 and 0.58). At 6.3 ± 1.5 h after the start of the 2-h infusion, the concentration of CdA was the same as the steady-state concentration during the 24-h infusion. When the mean plasma concentrations of the 12 patients were fitted to a 3-compartment model, the half-lives of the α-, β-, and τ-phases were 8 min, 1 h 6 min, and 6.3 h, respectively. The long terminal half-life of CdA after 2-h infusion supports the use of intermittent infusions. 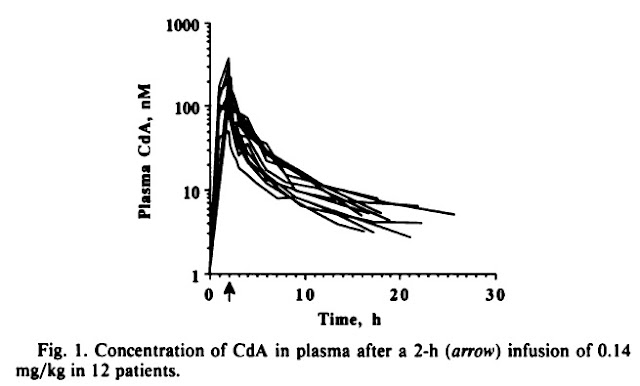 In a 70kg individual 0.14mg/kg amounts to approximately 10mg, which is the standard vial size of Cladribine across the Globe. 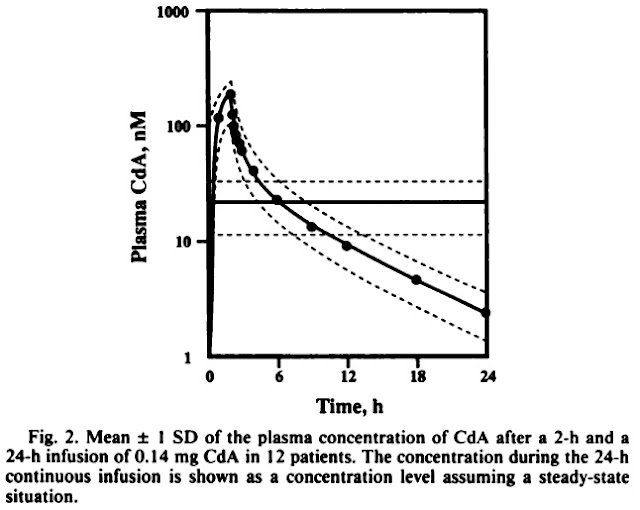 Over 25 years ago this study suggested Cladribine can be administered as short term (2h) rather than long term (24h) infusions without loss of effect.  A significant contribution towards a better understanding of Cladribine's pharmacokinetics to the point at which we are today, where we know it can be administered effectively and conveniently in short courses (infusions, subcutaneous injections, or tablets) in an outpatient setting.
Posted by Unknown at 22:31