Shaken or stirred: How would you like your Cladribine? 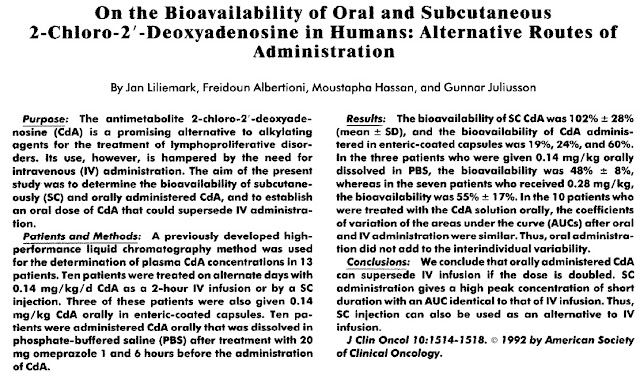 25 years ago this team of oncologists from the Karolinska University Hospital in Stockholm showed that Cladribine can not only be given as infusion but also as an injection under the skin, or administered as a drink. When taken orally the dose had to be doubled, but the figure below indicates the stunning similarity between all routes of administration in terms of plasma concentration.

Since Merck Serono took over development of oral Cladribine (Movectro), this route of administration cannot be used without infringing their patent.

However remember, only 6 (six) subcutaneous injections (10mg/vial) are required in a year to achieve a dose equivalent to the one successfully used when oral Cladribine was tested in CLARITY and ORACLE MS.

If Movectro gets a license from the EMA, and the annual course of treatment costs say £25,000, would you be prepared to have six injections* instead of generic Cladribine, for example Litak, costing less than £1,000?

This is a serious question.

*No injection site reactions such as those known from beta-interferons.
Posted by Unknown at 07:00

New comments are not allowed.